The Minoans: Seals and Sealings

Seals are personal designs carved into a small amulet style object, when stamped into clay it in effect leaves your signature. This manner of “sealing” an object was used to “lock” doors and chests, telling you (albeit afterward) if your privacy had been violated. The most influential use of seals were on clay documents. Most of the scenes on seals are religious or mythological, which may have added the power of superstition to its effect of locking an object. Seals were worn on a string or on a leather thong around the neck or wrist. Seals were most likely worn by the nobility first, and it is debated how far down the social ladder they went, but by the MM period most if not all craftsmen and nobles would have had one, if not multiple ones.


The earliest use of seals in the region was in Mesopotamia in the 6th millennium BCE by the Halaf culture, these people likely invented the stamp seal, although originally it was only used as aesthetic adornment. It took thousands of years for the technology to spread, but by 2,500 BCE in the town of Lerna, Greece, you find many seals with elaborate unique designs. These seals are found on tiles at the straightforwardly named “House of the Tiles”. The purpose of the seals and their tiles is unknown, but the findings show that by the EM period the commonality of seals and their masterful artisans had spread and proliferated across Greece (and most likely Crete). At Myrtos a seal was found with an “angle-filled cross” design, which was popular in Anatolia. By the EM period specific sealing designs had become a part of the larger fashion world, with popular styles traveling from Anatolia throughout the Aegean with traders.


EM period seals on Crete were not as elaborate as at Lerna but were still complex. EM seals vary in shape and design, mostly being pyramids, cones, or cylinders. EM seals were usually made of bone, ivory, or softer stones. The prevailing fashion was the stamp seal, as opposed to a rolling design. In contrast to the prevailing Syrian and Mesopotamian fashion, Cretan cylindrical seals had the sealing on either end and were used as a stamp. Contemporaneous near eastern seals have their design on the rolling section, allowing the user to roll out its design. EM period seal designs were usually simple, mostly crosses and hatching. The most elaborate of this period use early hieroglyphs or complex geometric spirals. Seals during this period were made at the village level, and while it is possible that each family made their own it seems more likely that even by this period specialized artisans were operating at a local scale. EM seals are found scattered in workshops or in houses, do not follow general patterns and almost never repeat.


As the urban temple elite begin to use seals through the MM period, they become structured around the management of goods. They are found clustered in central buildings, follow definite patterns, and often repeat themselves. Their use within all classes of society changed with the MM period. When used by the elite they are commonly found on scribal tablets or as door/chest locks. When used by businessmen, multiple individuals begin to seal their signature on the same document. In the early MM period wealthy Minoans imported eastern seals, but eventually nobles on the island began to only use Cretan made seals. “A common glyptic tradition evolves that seems to run in tandem with the growth of settlements like Knossos, Malia, and Phaistos.” -Judith Weingarten. Throughout the MM period seal artisans on Crete converged on the button shape. This quickly became a lens shape, with the seal print being done on one or both sides. Seals during this period stylistically explode, as urban seal carvers spread their wares and fame to more people, and competition creates a design arms race. Elaborate seals are associated with the tombs of the elite, and by the MM period the two go hand in hand. The destructive earthquake around 1,700 BCE entombed evidence of common seal use throughout temples, at Phaistos 327 different seals were found, 22% of which were non-geometric (showing plants, animals, or people). Most were soft stone, some hard stone, and five were metal rings.

Throughout the MM and LM period seal carvers experimented with multiple shapes and types of rock, depending on the patron's aesthetic or their personal creativity. Seals were designed as: buttons, lenses, cylinders, cones, prisms, stamps, crescents, animals, and birds. Seals were made out of: bone, ivory, steatite, banded agate, orange carnelian, hematite, jasper, chalcedony, lapis lazuli, rock crystal, amethyst, and obsidian. Imported hippopotamus and elephant ivory were used, showing a connection between the urban seal carver and the seafaring international trader. In fact, many designs from the early EM period show Egyptian influence, such as mimicking Egyptian burnt steatite or the inclusion of lions (a popular Egyptian sealing).

By 1,600 BCE and onward the wealthy procured gold and silver seals delicately carved onto rings or necklaces. These expertly crafted scenes give us many depictions of silent myths and rituals. In the destruction layer of the temple of Phaistos, only 5/327 seals were metal rings (0.015%). NT period metal rings uniquely show groups of people, in contrast to the average seal of the period which usually showed animals. Metal ring seals show a diversity of scenes, such as: hunting, fighting, chariots, and bull leaping. The most common sealing at LMIB Zakro, which was used by its temple leadership, actually included at least two very similar rings which showed the same cultic procession. This is an example of replica rings, which were similar sealings used by multiple people to enforce some aspect of authority. Most likely replica rings were used by people with the same duties or rank, imprinting their similar authority into documents. Replica rings are found throughout all the main LMIB sealing deposits. 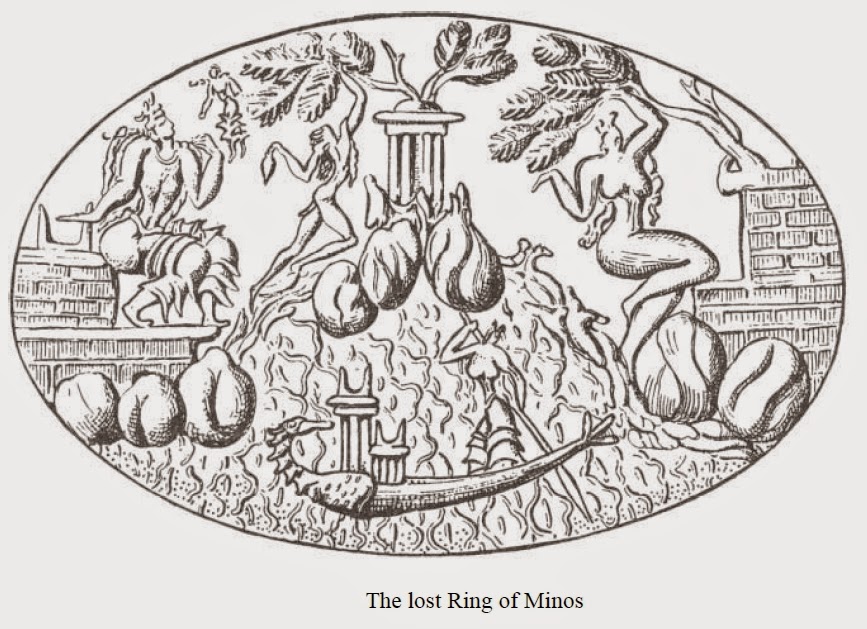 Many of these elaborate scenes are extremely small and detailed. Seal carvers were masters at working at such a scale, and their shops included many tools to help them achieve such perfection. Seals were cut with a cutting wheel and a tubular drill. Bronze gravers were used to carve fine detail into pieces. Most spectacularly magnifying lenses were found in a tomb at Knossos, and were most likely connected to a table with a bronze clamp. By 1,800-1,700 BCE Minoan seal carvers adopted the near eastern horizontal bow lathe. This allowed seal carvers to easily manipulate harder stone for the first time. Once the benefits of this new technology became known, everyone had to use it to compete. By this period bone and ivory seals drop out of circulation, as most artisans only create hard stone seals. The use of the bow drill allowed novel shapes as well, such as the handled signet and multiple sided prisms.


Many objects today fulfill the same purposes as seals in bronze age Eurasia. They functioned as your personal signature, an identity tag, elaborate jewelry, or a magical amulet. The style and wealth of your seal immediately showed others your status in society. A person could know if their house had been broken into, or if a container had been opened. People could put their name onto documents, allowing for mutual contracts. Since multiple people could sign their names onto documents people could effectively and easily share responsibility. Long term agreements were no longer simply spoken word deals, and this transformation in business subsequently created a transformation in personal wealth.


Your reputation became associated with your seal, and a well connected merchant could borrow objects in advance from trusted contacts. Effectively someone could use your seal as a line of credit. Anyone who had goods to sell would be helped by having a seal, anyone who needed to make long lasting agreement needed a seal. Seals allowed agreements to be treated as legally binding documents, allowing either partner to proof in a court. Most importantly, the increase in long term contracts and wealth compelled temple rulers to hire dozens of scribes to carefully record all of their taxes and possessions.


By the NT period seals are found not only clustered at temples but also at rural villas and farmhouses. These local outgrowths of power functioned as regional centers of authority, and while this rural authority did not include scribal documents, it did included much sealing. The elaborate designs of this period often set animals and humans into landscapes, evoking the well-known beauty of palatial frescoes. Most designs of this period were simplified into cushion seals, lens seals, and amygdaloid seals. NT seals show animals much more often than humans (85% to 15% of seals), but metal ring seals are the opposite mostly showing groups of people.


After the final fire at Knossos around 1,380 BCE the tradition of high quality Minoan seal carving began to die out on Crete. This is not to say that seal carving itself died out, in fact there is some amount of artisanal continuity between the Minoan era and the era of Mycenaean cultural domination. New styles and materials were imported with Mycenaean culture, such as using lapis lacedaemonius and near eastern black hematite. New styles also emerged such as reverse-facing animal pairs, and most interestingly Mycenaean influence births the earliest images of the minotaur. While nobles and businessmen still paid highly skilled artisans for beautiful seals, the expert and unique Minoan craftsmanship declined and on average most seals became simpler. More basic patterns became repeated without variation, lacking style or creativity, with specific scenes becoming set and sterile. Figures become rigid and less emotive, and eventually by 1,000 BCE both Minoan and Mycenaean culture had died out, bringing an end to their separate and unique sealing traditions.

Wearing seals never actually stopped, in fact even wearing Minoan seals never died out. Rural people would find “milk-stones” and wear them as necklaces. This practice was so common in the modern era that milk-stones had become a part of local superstitions. They held magical power and helped a mother's breast milk. Shepherds and farmers uncovered Minoan seals at random specifically on Kephala hill by Knossos. When Arthur Evans first went to Crete in 1894 he went to Knossos and became enamored with milk-stones, he eventually started collecting them. It was not until his excavation in 1900 that people came to realize these amulets were in fact Minoan seals.


The Power of Seals http://bit.ly/1IUJrt3
Posted by Antiquated Antiquarian at 11:34 AM