Exploring the Neanderthal Mind, an Introduction 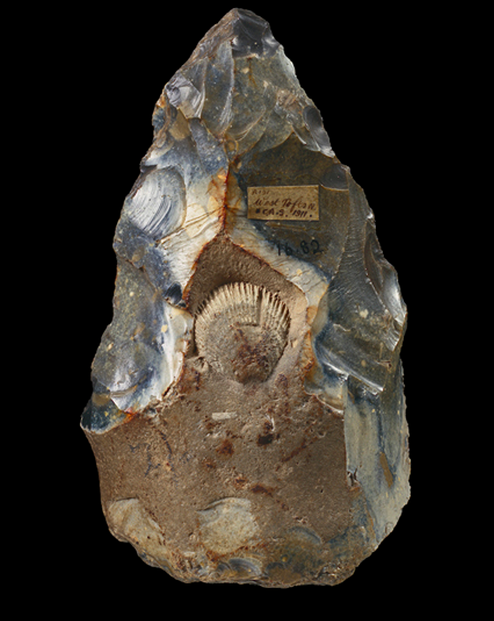 What do you see when you look at the object above? In one view, it is completely unremarkable. It is simply a stone cutting tool used be prehistoric people, a basic technology made by hitting rocks with other rocks. Stonework like this is our first, and our least complex technology. Switching to another view, it is completely unlike any other stone tool you've ever seen. Your eyes have already spotted the fossil in the center of the piece. This tool was designed to cut things, but it was also designed for you to see that fossil. The stone from which this was made was chipped away in such a manner as to bring that fossil to the surface. The fossil was not only intentionally revealed, but was intentionally centered so as to draw your focus. This simple hand axe raises a difficult question: Does this object look beautiful?

I'm curious as to what people today see in this object because I hope it can shed light on a related, yet much more difficult question. You see, there is a problem – this hand axe found in Norfolk England was not made by the English, I'm not asking whether we see this as beautiful, because we didn't make it. It was made around 200,000 years ago by a Neanderthal. Special rocks, such as this, were traded between far flung Neanderthal groups, sometimes 100-200 miles. It is revealing that regular old hand axes were not traded in this way, they did not have the same value. The question I really want to know is why. Why did Neanderthals incorporate fossils into their hand axes? What made these hand axes so different than all the others, what was their extra-ordinary value?

Those questions hinge on Neanderthal behavior, the question can be reformatted as: What is it about their behavior which motivated them to incorporate fossils into objects. This question relies on a simple premise, that their physical behavior is indicative of mental behavior. Neanderthals treated these rocks differently because they thought about them differently. This is the deeper question I'm trying to ask: What did a Neanderthal see when they looked at this hand axe? Did they, as we might now, see something aesthetically pleasing or beautiful?

This is partially an impossible question, as it asks for facts about the mental phenomena of long dead individuals in a long dead species. This question may at first glance seem unanswerable, but that premise is not my starting point. If such questions were outright unanswerable then the discussion would promptly cease. While I obviously cannot answer questions about the Neanderthal mind with scientific assurance, I will try to get as close to answering them as I can. To construct a lexicon of the Neanderthal mental capacity necessitates understanding their behavioral repertoire...all of which requires an extreme amount of context! To slow chip away at the obfuscated mountain of the Neanderthal mind, we must be cognizant of their behavior, physiology, culture, and genome. Hopefully, employing context can reveal which Neanderthal behaviors necessitate certain thoughts. So let us begin...


The easiest way to comprehend such large scales of time is through the notation kya (thousand years ago). Compared to the present, I was born 0.025 kya. The first World War began 0.1 kya, and Columbus led Europeans to the New World 0.5 kya. 1 kya Byzantine Orthodoxy and Roman Catholicism split as the Pope and Patriarch excommunicated each other, and 2 kya the Roman Emperor Tiberius was purging his Praetorian guard wholly unconcerned with the crucifixion of radical preachers in Judaea. Mentioned in my previous post, the first human megalith at Gobekli Tepe was constructed around 11.5 kya. Homo Sapiens Neanderthalensis existed from around 250-28 kya. We split from a common ancestor around 400-350 kya, most likely from Homo Heidelbergensis. Oh, who could guess where Homo Heidelbergensis was first discovered? Heidelbergensis originated around 1,300-800 kya and lived til around 200 kya, ranging over eastern/southern Africa, Europe, and western Asia. As groups of Heidelbergensis became more and more spread out across their landscape, their lineage began to diverge. Around 400-350 kya African Heidelbergensis started to make physiological moves towards modern humans. It was around the same time when the Eurasian branch started to move towards Neanderthals. Heidelbergensis also spawned Denisovans in the modern day steppes of Russia, and a fourth unknown lineage presumably in south-east Asia.

Giving such precise dates as 250-28 kya is completely impossible. Many people debate both of those numbers. The first emergence of Neanderthals is impossible to pin down – all we have are a collection of Neanderthal traits emerging around 300-200 kya, with Neanderthals becoming genetically distinct between 400-300 kya. The last Neanderthals are also impossible to pin down, generally they died out around 40-28 kya, completely depending on which carbon dating results you accept. The assumption that Homo Heidelbergensis is our common ancestor with Neanderthals is also up in the air: a recent study from 2013 which examined 1200 molars from 13 hominin species found results contradictory to anthropological orthodoxy. “None of the species that have been previously suggested as the last common ancestor of Neanderthals and modern humans has a dental morphology that is fully compatible with the expected morphology of this ancestor.” -Aida Gomes-Robles. The species thrown out are all of the common suspects: Heidelbergensis, Homo Erectus, Homo Antecessor. This would suggest that our common ancestor with Neanderthals existed more than 1 million years ago, instead of 300-400 kya. “The study tells us that there are still new hominin finds waiting to be made...fossil finds from about 1 million years ago in Africa deserve close scrutiny as the possible ancestor of Neanderthals and modern humans.” -David Polly. Now it would be unreasonable to radically alter our timeline from one study, but the gist is that it's complicated. For now, I will assume the general timeline and that Heidelbergensis is our common ancestor with Neanderthals.

During their lifetime, Neanderthals ranged throughout central Asia and Europe. The Neanderthal population was spread out unevenly, with the greatest amount of contact between groups in central Asia. This is because this area shows the greatest diversity in Neanderthal DNA, giving evidence to idea that their homeland was in Asia with occasional branches entering Europe. How in the world can we say anything about Neanderthal DNA? Surprisingly enough we can say a lot, their genes tell a strange and previously unknown story which has only recently been deciphered. Svante Paabo (Svante Pääbo) started working with DNA in 1981, extracting samples from Egyptian mummies. No one thought it was possible to get a real workable sample, but he did. He moved on to extracting DNA from extinct cave bears and ground sloths, which again no one thought would be possible. He proved them wrong. Moving on from extinct bears to extinct hominins, most recently in 2010 Svante Paabo and colleagues (56 other researchers) at the Max Planck Institute for Evolutionary Anthropology uncovered the Neanderthal genome. In 2013 they discovered all 3 billion base pairs, and since then research has been slowly piecing together the consequence of this discovery. This groundbreaking research from 2006-2010 catapulted him to fame. Now (in 2014) we can read the Neanderthal genome side by side to our own, an insane feat of modern science thought impossible merely 10 years ago. If Neanderthals became genetically distinct from our common ancestor between 400-300 kya, how has the intervening years changed their genome?

Posted by Antiquated Antiquarian at 8:35 PM